Martha Pinkerton
Martha is a talented copywriter who has her own blog where she shares her ideas and personal sex life experience. For our portal, she also conducts product tests when needed and shares her findings without hiding anything.

Doris Edwards
Doris works at an adult toy shop, so she knows everything about practically any kind of device you might be interested in. She's our main consultant, especially when it comes to something technically complex and unknown.

Martha Pinkerton
Martha is a talented copywriter who has her own blog where she shares her ideas and personal sex life experience. For our portal, she also conducts product tests when needed and shares her findings without hiding anything.

Doris Edwards
Doris works at an adult toy shop, so she knows everything about practically any kind of device you might be interested in. She's our main consultant, especially when it comes to something technically complex and unknown.
Joy Nights is reader-supported. We may earn a commission through products purchased using links on this page. Learn more about our process here
Ideal for
Main features:
Editor's Rating
?
NightScore is a ranking system developed by our team of experts. It aggregates all the scores given to a product in various aspects including the individual product’s features evaluation given by each expert independently, its customers’ feedback rank, and sales rank.
9.4
out of 10
Users’ Rating
4.4
out of 5

Check price
Joy Nights is reader-supported. We may earn a commission through products purchased using links on this page. Learn more about our process here

The Zumio S is a revolutionary clitoral stimulator with a unique concept invented by women for women. What makes Zumio unique is its antenna-like SpiroTIP™. The tip is made of hard plastic and it is tiny, less than 0.8 inches in diameter. It is the size of a pearl or earring, smaller than anything you would have ever pressed against your clitoris in pursuit of orgasm.

Here in this review, we’ll break down everything about the functionality and features of the Zumio S. 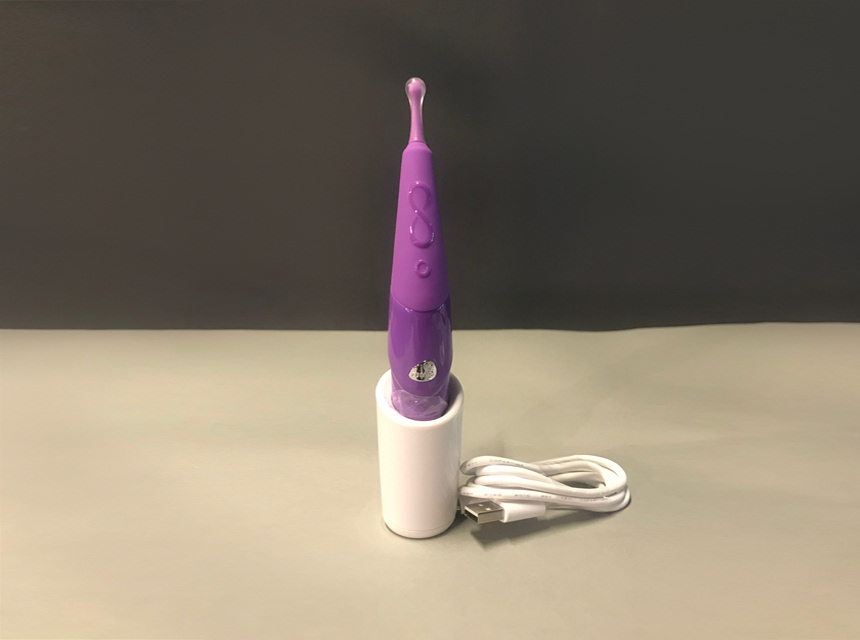 The principle of the Zumio is that it has a kind of small plastic tip ending in a ball of a few millimeters (called SpiroTIP). This SpiroTIP does not vibrate but makes very small circles quickly. This movement of the tip stimulates the area where it is placed.

The action of the SpiroTIP is unique since the movement does not resemble a vibration. Its mechanism is based on oscillation and not vibration.

To use the Zumio S, you need to charge it. Thankfully, this is wireless. Charging takes a long time, so you may need to do this overnight. You can start with the stimulation of the entire vulva with the tip of the sex toy. Then apply the tip directly to the clitoris.

It is necessary to use it on the lips before attacking the clitoris or you may just overload the clitoris with sensations. But once you understood how to use it, you will be treated to beautiful orgasms.

Be careful, however, when using it with another person. It is difficult to keep the pressure on the flesh with the SpiroTIP. You may sometimes generate too strong sensations for your partner (this is something that does not happen when you use it alone obviously).

The great thing about the Zumio is that you can walk it over all areas of the body, as it stimulates well and in a fairly precise way, it can stimulate the breasts, the belly, etc. It is very nice in body exploration.

Finally, little interest in the butt. You can insert the SpiroTIP a few centimeters into the anus, it’s kindly pleasant but nothing more.

The Zumio brand listened to its users and with this clitoris stimulator, offers a softer stimulation of the clitoris and the erogenous zones while remaining effective. Alone or in pairs, it satisfies all tastes.

The Zumio S can be used during intimate games alone or in pairs and if you feel like it, during sex.

This is a good product for those with sensitive clitoris or those who like gentle stimulation. The finish of the Zumio Caress is perfect. In precision, it is identical to the Zumio Original. We find the same level of quality.

Although it could make you orgasm, you had to be careful when using it not to hurt yourself because of the power of vibrations combined with the fact that they were ultra localized on a single point (the tip of the Zumio). It was too “stimulating” for some users.

The Zumio has 8 intensities. We wouldn’t say your clit is ‘extremely sensitive’ if you can’t get any further than position 1. We find the position 1 as super-mega-ultra-heavy on the clit itself.

Nice, but unnecessary for me. But again; clits are different in sensitivity. Maybe you can go sky high with position 8!

This toy is made of ABS plastic and silicone. They are non-porous materials and body-safe: no phthalates or other crap. You are on a toy that only wants you good. The brand logo is in silver, the whole body is pretty purple, and the buttons are embossed, so you can find them easily without having to look at what you are doing. You can focus on your pleasure and not think anything else!

Just like the X version (also called Original), the Zumio S clitoral stimulator has the same design. Only the SpiroTip is different, and this is good news even if the silicone used is still not soft. It is still shorter, has a larger ball, it is more pleasant and softer in use. Despite everything, just like the Original, its texture could have been nicer.

The process of cleaning the Zumio S is the same as the Original. As we mentioned earlier, the material is nonporous as it’s made of rigid ABS. You can use a sex toy cleaner or soap and hot water for cleanup. 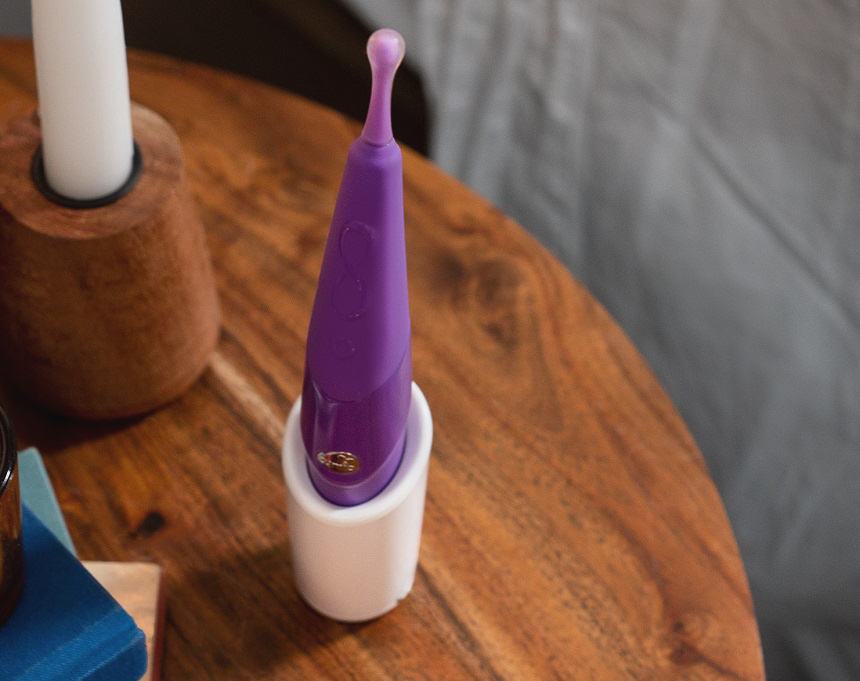 Some of the main features of this tool include:

Charging is extremely simple, just connect the induction charging cradle to the USB cable, plug it into a computer, and place the Zumio Caress vertically on its cradle. On the other hand, it should be noted that induction charging takes 16 hours in all to fully charge it.

The Zumio Caress is quite small. It is about 17.5cm long and 2.5cm wide. Its contactless charging base is approximately 6.5 cm high. It has the same dimensions as the original Zumio.

The Zumio Caress has 8-speed settings. The lowest is already ultra-fast, talkless of the 8th level. At the lowest setting, it oscillates at around 57 rpm to the fastest around 110 rpm.

The Zumio Caress has three control buttons. Two to modify the intensity and one to turn the sex toy on or off.

It should be noted that it has a travel lock for travel sake. This prevents the toy from being triggered in a suitcase for example. Thank you, Zumio!

The Zumio S is sold for less than $120. While this may seem expensive, it’s great value, considering the charging technology and the powerful orgasmic experience it offers. It comes at the same price when compared with other Zumio sex toys: that is the Zumio X, Zumio I, Zumio E.

How Does Zumio S Compare with Other Zumio Models?

The biggest difference between the X and the S (next to the slightly different color) is the bigger tip of the S. This not only makes it look less fragile (and it is also less fragile of course), but it is also a bit more pleasant to stimulate.

The stimulation is still fierce and hard (because the engine and everything inside the Zumio S are the same as the X), but it feels a bit nicer, softer.

But the SpiroTip is different. On the Zumio S the tip is thinner and harder, while on the Zumio X, the tip is thicker, with a soft layer of transparent silicone around it. It also looks funny, as if the tip was dipped in something.

While the Zumio Original version may seem too powerful and unusable for some, this new Zumio Caress opens up new possibilities and sensations.

Note also that the only difference between the two models comes from the size and shape of the SpiroTIP. On the original Zumio, it is larger and therefore stimulates more, as we mentioned in the Zumio S review. On the Zumio S, is smaller and has a silicone shell to stimulate a little less. Otherwise, the engine, the finish, the quality of assembly, the tightness, the speeds, the battery, the charger, everything is identical. But this difference in the SpiroTIP changes everything.