As our Angela White Fleshlight review is going to show you, this sex toy is nothing like you’ve experienced before thanks to its perfectly textured construction that includes multiple bumps to simulate real pussy and butt hole. Let’s dive right in and tell you all about this exciting Fleshlight toy.

As we hinted earlier, the Angela White Fleshlight is packed with a lot of exciting features that make the toy quite realistic. Below, we’ll discuss these features in great detail:

If there was only one word to describe the performance of Angela White Fleshlight, it would be “incredible”. The toy’s sleeve is made from Fleshlight’s patented SuperSkin material—a life-like material that mimics intercourse. With an inner length that runs to nearly 9 inches and an opening diameter of 0.7 inches, the Angela White Fleshlight satisfies any dick size.

Furthermore, the Fleshlight boasts ribs that vary in thickness and “hug” your dick for the ultimate pleasure. You can also trust the contours and ridges to stimulate your penis to powerful orgasms. On top of that, the toy’s incredible suction takes you over the top. Additionally, getting your dick inside the Angela White Fleshlight is a breeze. 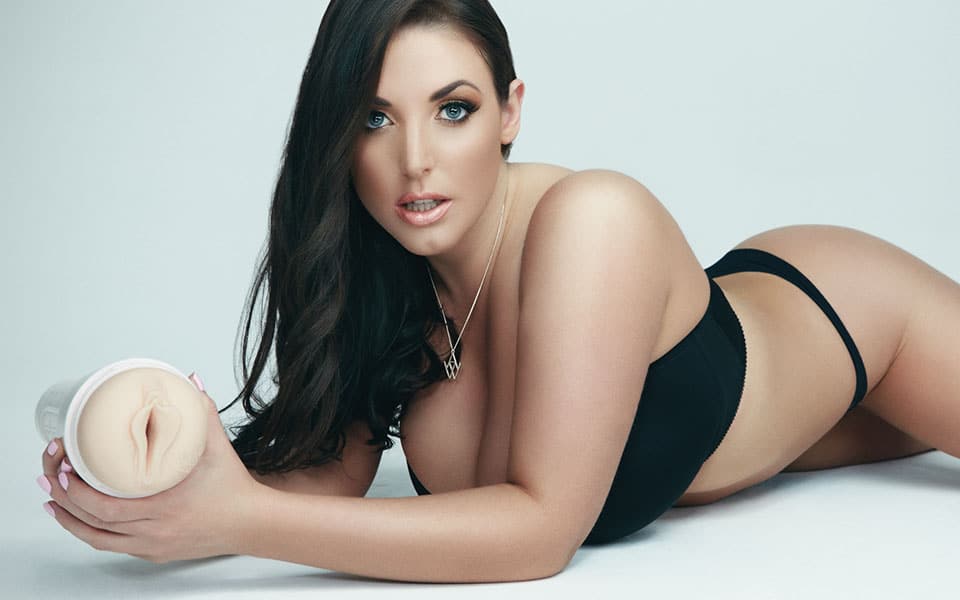 When we suggested that the Angela White Fleshlight is easy to use, we knew exactly what we were talking about. Below, we’ll discuss how to use the toy and enjoy it:

Talking of the Angela White Fleshlight’s inner texture, there are two variants to consider here; the Indulge (pussy) and Entice (butt hole) textures. The Indulge’s inner texture features three chambers that are arranged in decreasing diameter. Hence, the further you go, the tighter the sleeve feels and the more intense the level of pleasure.

Besides, there are several bumps along the way that apply pressure to your shaft to heighten stimulation.

On the other hand, the Entice’s inner texture features four helical spirals that distinguish specific areas. These spirals produce an exciting sensation on your penis as you drive into the canal. Plus, this variant’s inner texture combines twisted ribs, cube-shaped bumps, and donut-shaped bumps to give you a pleasurable milking and massaging sensation.

However, you’ll need to use the right materials to get the best out of the sex toy. For example, you need to lubricate the Fleshlight’s sleeve with water-based lube before use to enjoy the best experience. Luckily for you, the product comes with a sachet of water-based lube.

Also, you can get the best out of your Angela White Fleshlight by tightening and loosening the end-cap to control suction for extra realism. Another way to enjoy the sex toy is to get it warmed up with a Sleeve Warmer. Such a move makes the sleeve feel like the human touch, adding more realism for sex.

However, the butt variant is a bit tighter to enter than the vagina version. Overall, the Fleshlight’s orifices feel quite realistic and are easy to enter.

Frankly, the multiple bumps of the Angela White Fleshlight’s sleeve make cleaning a bit difficult. However, it’s not a complicated exercise. Simply remove the sleeve from its case, rinse it with plenty of water, and you’ll be good. Remember to let the toy dry completely before putting it away for storage. You should know that the big surface area increases the Fleshlight’s drying time.

Like other Fleshlight toys, the Angela White Fleshlight is made from a hypoallergenic material that’s completely body-safe. Essentially, the toy is allergen-free and you can trust it not to mess with your skin.

The brilliant construction of the Angela White Fleshlight is what makes the toy a popular choice and we’ll dissect it below:

The Angela White Fleshlight features a pearlescent case that hides the toy’s sleeve.

The case is as discreet as possible and it’s pretty reliable to hold its shape for a long time.

Both the Indulge and Entice textures of the Angela White Fleshlight do not differ in inner length and diameter. The inner length of the textures ranges between 6.25 and 8.75 inches, enough to satisfy any penis size. Also, the toys’ diameter narrows down from 0.7 inches to 0.25 inches.

Let’s get you familiar with more information about the Angela White Fleshlight below:

With Fleshlight, you don’t have to worry about your privacy because the company does everything to protect it. When you purchase the Angela White Fleshlight, it will arrive in discreet packaging that no one will be able to tell what you have in there.

As we suggested before, the Angela White Fleshlight’s construction is quite reliable and that makes it durable too. With this sex toy, there’s nothing to worry about in terms of longevity as long you use it correctly.

The Angela White Fleshlight’s discreet case makes storage a whole lot easier. Simply stash the toy away in a small box and you’ll be good.

Compared to other Fleshlight toys, the Angela White Fleshlight is moderately priced and is great value for the money. Surely, it’s one of those sex toys that deliver maximum pleasure.

Wrapping up the Angela White Fleshlight review, this sex toy is intricately designed to provide great pleasure. From the Indulge texture to the Entice variant, the fun is unrestricted. Best of all, the sex toy is durable.